This is the second attempt at recreating the best meal we had on our La Toure de Trappe trip through Blegium. The first dish we made, Chicken Waterzooi, was delicious, but nothing like what we had in Rochefort. This next recipe is based on something I found online, and on paper it looks a lot more like what we are trying to recreate. The original recipe can be found here (it’s all in French).

This recipes has raisins and apple which should add the sweetness that was missing in the previous attempt. It also calls for a lot of chicory, and as a kid growing up in Louisiana I knew chicory as a dark ground up root that was used in coffee. Thankfully I figured out that in French speaking countries chicory means endive.

This turned out not nearly as dark as what we had in Rochefort, but the consistency is much closer. The flavor is also much sweeter than the chicken waterzooi. What I was not expecting is how strong the mustard is in this dish. We used Dijon mustard because I thought that would be more authentic, but Casey thought it was too strong. I really loved the flavor it provided, bu you may want to use a little less mustard than called for in the recipe below.

I really like this a lot. I like it better than the waterzooi. It is also a lot closer to what we had in Rochefort, but it’s still not close enough to say we succeeded. We’ll try another recipe in the next week or two. If you have a great beer and chicken recipe then please send it my way and we’ll give it a try! 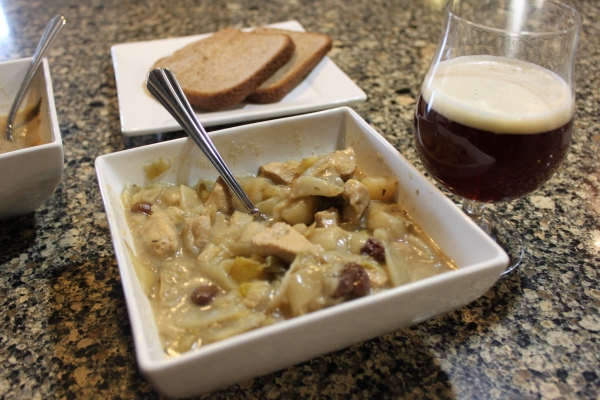 Cut the chicken breasts into pieces. Slice the endives .

Heat the butter in a wok or large pan. Fry the chicken (in batches if necessary).

Add the endives and raisins. Cook for a few minutes.

Meanwhile, dice the peeled apple. Add the apple, apple cider vinegar, and mustard to the pan.

Add the cream to the pan.

Slowly pour the corn starch into the pan while stirring.

Add salt and pepper to taste.