A Sunday Drive for Delaware Beer – Part One 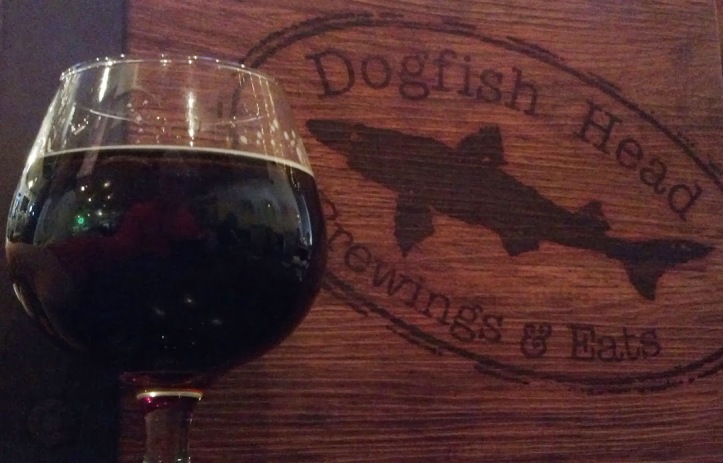 This past Sunday we needed to take a little trip to Delaware to pick up some homebrewing equipment, so we thought why not make it a full on beer road trip? We met up with some friends from the Annapolis Homebrew Club and made our way to the farm filled desolation lovingly referred to as “The First State.” Don’t get me wrong, Delaware isn’t all bad, but man they really need some East-to-West highways.

The drive took longer than expected but we eventually found the location of the equipment we were after. The guy selling it all was giving up drinking, but after driving through Southern Delaware I don’t know how anyone there could not want to drink. One thing Delaware definitely has going for it is a bunch of great breweries, especially considering the size of the state. We only had a few hours so we couldn’t visit them all, but we made sure to make it to the Dogfish Head Brewpub in Rehoboth Beach, and 16 Mile Brewery in Georgetown.

When we got to the Dogfish Brewpub I was excited to see that the Chicory Stout was still on tap. If you haven’t heard, the Chicory stout is no longer in production and has been replaced by Piercing Pils, a Pilsner made with pear juice. I’ve tried it, and I wasn’t impressed. Why Dogfish would replace a dark and roasty model of perfection with a light, slightly sweet, and in my opinion subpar beer is beyond me, but I also don’t run a multimillion dollar brewing company.

The other exciting thing about the Dogfish Brewpub is that they have a number of beers that they brew and only sell at the brewpub. Since they brew in very small batches the brewers get a lot of opportunities to make some really creative beers. We had a beer made with wild carrot seed and another made with a bread pudding. Here is a quick run down:

Wild Carrot Seed Ale: A pale ale with the addition of wild carrot (Queen Anne’s Lace) seed. As far as pale ale goes it was not typical. It tasted more like a Belgian pale with bready malt and a peppery spiciness. There was a very earthy flavor like rich soil that I assume was from the wild carrot seed and possibly the choice of hops.

Just Richard: A very interesting English Old Ale, which is normally malty with flavors like plum, raisin, and caramel. Old Ales often end up being the base for many winter warmers or Christmas beers, and many breweries will add holiday spices like cinnamon, all spice, or clove. What makes Just Richard unique is the addition of roasted chestnuts and Spotted Dick, an English bread pudding that is spiced and full of raisins. All of these flavors worked really well in this beer.

Bocce Beer: This is a session ale (meaning it’s fairly low in alcohol so you can have quite a few over a long drinking session) that’s malty and hoppy. Bocce is brewed similar to an English pale ale so it has lots of biscuit and malt flavor but also uses Galaxy hops for flavor and aroma. Galaxy is a hop variety from Australia that has become popular due to its tropical fruit and melon characteristics, and those flavors and aromas really come through in this beer.

Brewdolph: This beer looks deceptively light but has all kinds of flavors going on. It’s absolutely packed with spices like cardamom, white pepper, cinnamon and habanero. There is also a bit of vanilla that helps tame some of the heat from the pepper. This is a good example on how to use hot peppers in a beer.

Noble Rot: An interesting wine/beer hybrid. This beer contains the must (grape juice before it becomes wine) of two different wine grapes. One of the grapes has been infected with a fungus that concentrates the sugars making the grape sweeter than normal. Noble Rot has a lot of sweet white wine flavor. There is no mistaking that this is made with white grapes.

We tried some great beers but soon it was time to go. We filled a growler with Chicory Stout, then made our way to 16 Mile Brewing Company. I think 16 Mile deserves its own post so expect to see that in the near future.