I was really intrigued when I saw that Stan and Joe’s was having a beer and food pairing with Heavy Seas for Annapolis Beer Week. Stan and Joe’s touts itself as a saloon, and the food typically follows that theme. The food always comes out in big portions, it’s American with Chesapeake Bay inspiration, it’s usually pretty affordable, and it’s not the stuff you usually see at a beer dinner. Most beer dinners follow the typical five course offering of starter, salad, starch, entree, and dessert, with a beer paired for each course.

I knew this was going to be a very Stan and Joe’s event when I saw the menu and realized it was being called a beer and food pairing, not a dinner. What I didn’t know is that the setting was going to turn this into one of the best beer dinner experiences I have ever had.

First off, I would call this a semi-structured event. Each course was served to everyone at the same time, but you could continue to get beer from the previous courses. This meant you could taste a beer that wasn’t paired with the food right alongside the beer that was paired with the food. This allowed you to gain a better appreciation for the effort put into the food and beer pairings.

Also, the food was fantastic. But it was the atmosphere and small crowd that really made this event a bit more intimate. For some reason the place just wasn’t full, and there was one great thing about this small turn out. Casey and I got to spend most of the evening talking to Heavy Seas owner Hugh Sisson. If you follow this blog, or have met me, then you know that I not only love homebrew and craft beer itself, but I take a lot of interest in the industry, the regulations, and where the market and trends are going. It’s easy to find people passionate about beer, but it’s a bit rare to find someone that is equally knowledgeable about the business of beer and how it’s regulated.

Hugh has been in the craft beer industry since before the bubble burst in the 1990s. Craft beer was growing as fast as 70% annually from the mid-80s to mid-90s, but then took a nose dive in 1997. Most breweries had planned for more years of double digit growth and the sudden drop led to breweries all over the country closing up shop. Craft beer didn’t really recover until 2003, and is now back into double digit growth with no signs of slowing down. Hugh went through all of this and is still running a successful brewery.

Hugh, Casey, and I talked about the state of the local market and Heavy Seas’ position there. We compared and contrasted the bubble of the 1990’s to the incredible growth craft beer is seeing today. We even touched a bit on three-tiered distribution.  I could have talked to Hugh all night.

But it wasn’t just talking about beer and the craft beer market that made this a great night. The incredible food and beer pairings really showed what can be done with food and beer. Stan and Joe’s manager Mike Wiland walked us through the perfect five course saloon and beer menu. It’s what you would serve at a high-class tailgate party.

Mussels in a garlic herb sauce and served with Riptide White IPA served from a cask. The Riptide is a Belgian inspired IPA, and mussels are a very Belgian dish; the combination was close to perfection. 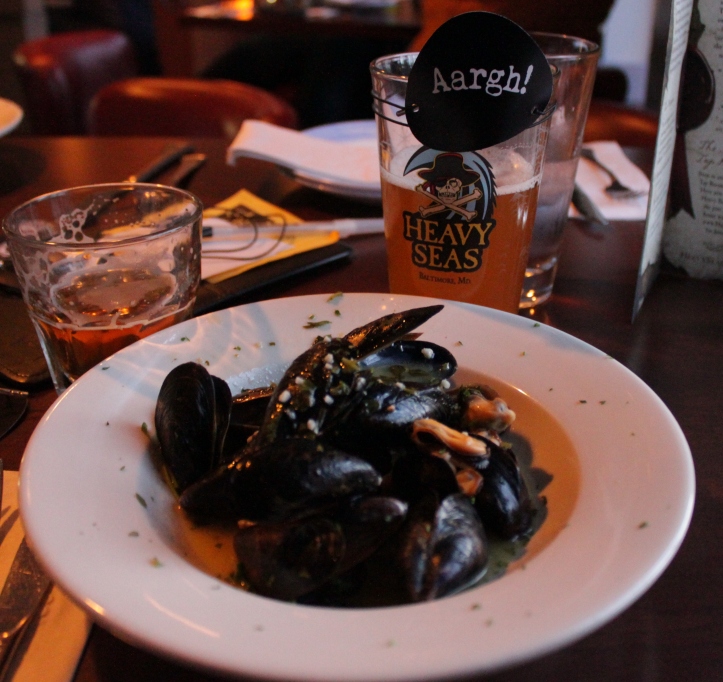 And did I mention that the riptide was from a cask?

Baked Meatballs in a Cannon IPA barbecue sauce that was served over a pretzel roll, and paired with Black Cannon Black IPA. I ate every single bite.

Bratwurst marinated in, and paired with, Heavy Seas Big DIPA (Double India Pale Ale). You may think you’ve had a great bratwurst, but you haven’t. This bratwurst was braised in double IPA for TWENTY FOUR HOURS. The bun was perfectly toasted, the brat was topped with buttery grilled onions and bell pepper, and the meat was silky smooth from the braising, but still held together perfectly.

Chocolate Stout Cheesecake served in a lake of chocolate mousse and paired with Siren Noire Imperial Chocolate Stout. This was the crown jewel of the evening in terms of food and beer. The texture and flavor of the cheese cake was incredible. A dollop of chocolate mouse with every bite gave it several layers of rich chocolaty complexity. The Siren Noire was the best version of this beer I’ve ever tasted. The beer was intensely chocolaty and roasty, even after taking a bite of the super chocolaty cheesecake. The layers of flavor in this course spanned the entirety of “deep,” “dark,” chocolate, and roast.

Do not miss the next Stan and Joe’s beer and food pairing. The saloon menu takes a different approach than the usual beer dinner offering. The semi-structured way it is served lets you explore pairings the hosts did not intend, while also highlighting why they paired the foods and beers they did. I will not miss the next one.