Beer, Bacon, Music: From Someone That Was There and Lived to Write About It

Maybe you missed it but the big beer event Beer, Bacon, Music took place in Frederick, MD this past weekend. Also, a bunch of really pissed off people posted about it on Reddit and on the event’s Facebook page. I was there the entire weekend and here is my take on what went wrong and what went right.

Now full disclosure here, I have no affiliation with Beer, Bacon, Music (BBM) or its organizers, but there was also a homebrew competition associated with the festival and the Annapolis Homebrew Club was asked to judge the Amber category of beers. The Club’s (BJCP) certified judges (myself included) judged the beers for that category on 3 May. I then e-mailed the results to the organizers. Any official involvement with the event ended there.

The grand prize for the homebrew competition was $6,000 and there were several prizes ranging in value from $500-$1,000 for having the best beer in your category. The catch is that you had to be present to win. So all the way back in February about a dozen of us from the Annapolis Homebrew Club decided that the prizes and the promise of a weekend full of beer and bacon would be worth the trip to Frederick.

The first sign that something was wrong was when the rules for the homebrew competition kept changing. The rule changes actually made things a bit easier on the homebrewers, but it showed that some of the planning hadn’t been thought through all the way.

The next big sign that things were a bit off came from talking to a few Maryland brewery reps and members of the Brewer’s Association of Maryland (BAM). There are always two sides to every story but I’ve heard from several sources that no one from BBM worked with BAM to coordinate the schedule for this event and BBM was scheduled two weeks before BAM’s Maryland Craft Beer Fest which is also held in Frederick. The result is that many Maryland breweries chose to boycott the event. This seemed to be confirmed by the lack of Maryland breweries that participated in BBM. The only Maryland breweries I saw participating were Full Tilt and Tall Tales. Not even a single brewery based in Frederick participated in Beer, Bacon, Music.

Annapolis Homebrew Club members decided to press on, despite the rumors and signs of disorganization. Some members booked hotel rooms, and a few decided to spend the weekend camping, but the true warriors in the group rented an RV and parked it in the middle of the fairgrounds right beside the entrance to the Beer, Bacon, Music festival.

We arrived on Friday evening because we were required to drop off our competition entries before 7pm that night. This is when we saw the first major signs of poor planning and disorganization at the event. We pulled up just after 6pm and were told they had ran out of tickets and had no way to print more. We were told they would give our names to the people at the gate, and they would let us in if we just showed them ID on Saturday morning. This is odd since they knew exactly how many people had entered the homebrew competition and should have known exactly how many tickets to have on hand.

We then asked about the homebrewer happy hour that had started at 5pm and it turned out the happy hour had already ran out of beer. I didn’t go (obviously), but I was told there was only one person pouring for around 200 homebrewers, and I only found one person that said that got more than one beer before the taps ran dry. We headed into Frederick for dinner and to prepare for Saturday.

On Saturday we relaxed while waiting for the gates to open.

We should have been fighting and clawing our way to the front of the line to save ourselves from the complete shit show that was about to take place.

We got in line just after 11am because it was filling up quickly and we still weren’t sure about the whole not having tickets thing. What I saw in the line is that people who bought tickets online were waiting to get in while people who bought tickets at the gate could walk up, buy a ticket, then walk right into the fest. It appeared something was wrong with the ticket scanners. Some people didn’t even have tickets to scan because the received a receipt via e-mail but no tickets were attached to the receipt (I was one of those). Also, they had several different armbands depending on the type of ticket you purchased and no one working the gate seemed to know which armbands to hand out (more fun with this later).

We gave them our names when we got to the front but no one had any idea what to do with us. They looked up some us in a database but had no record of others. After about 20 minutes we were given 2-day pass armbands, were told to keep them on because we would need them for Sunday, and finally got into the fest.

Once we were inside things seemed to go more smoothly. Lines were fairly short, beer was flowing, and bands were playing. However, after about an hour a security guard came up to me and demanded to see my ID. Apparently in addition to my 2-day armband I needed a drinking armband that no one at the gate had ever mentioned. Thankfully the security guard had planned for this and had a pocket full of drinking armbands. She was an oasis of planning and organization in a desert of fucktardedness.

With my all powerful drinking armband I continued to sample different beers. I had some good beers, I had some mediocre beers, and I had 2-3 that I dumped on the ground. 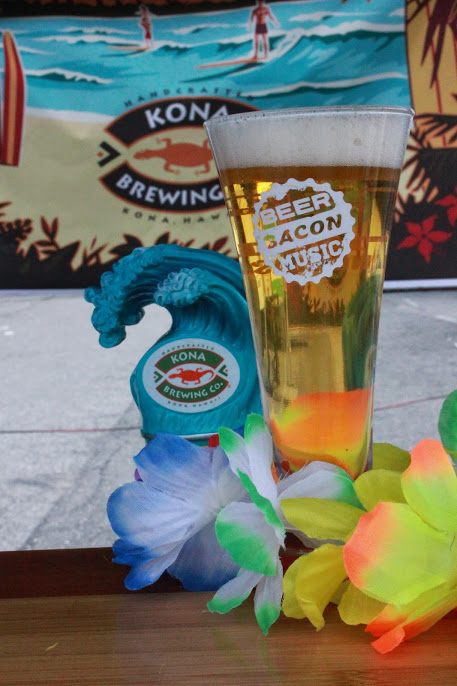 I’ve read some people complain about there not being the advertised +100 beers, but I counted over 70 taps (not including the VIP taps) and the beer on some of those taps rotated throughout the fest. Some breweries, like Troeg’s, put special beers like Nugget Nectar on tap at a certain time. It’s possible there weren’t 100 taps but it’s likely that there were 100 different beers served throughout each day.

Regardless of how many beers were there I never felt like I stood in line for too long. I will say that toward the end of Saturday the crowd was huge. The place was absolutely packed, but some booths like Green Flash, Lagunitas, and Lonerider had consistently short (or non-existent) lines. DuClaw on the other hand had ridiculously long lines and I never even tried to drink one of their beers.

I also never saw anyone run out of beer, but I talked to one of the reps and I know they were really, really close. He said they were scrambling to get more beer delivered for Sunday. 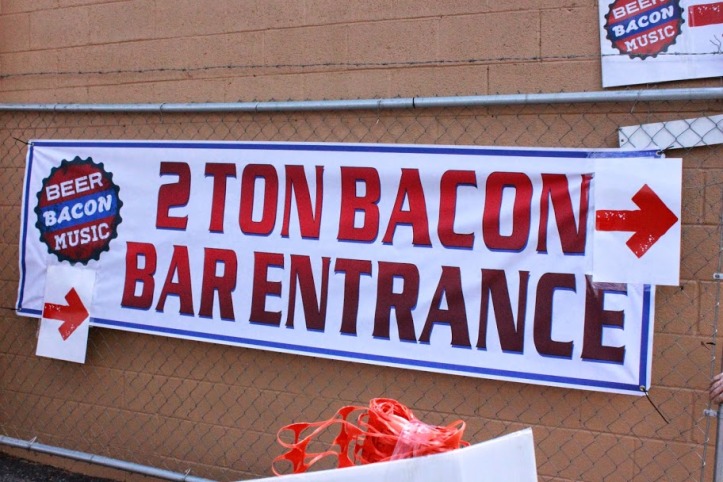 I’ve also read that they ran out of bacon by 1:30pm on Saturday. However, I hit the bacon bar at 1:30pm, around 3:00pm, and at 5:00pm, and I got bacon every time. I took the following photo at exactly 1:30pm (according to my camera) as I was walking out of the bacon bar, and there were still four tables with a total of 24 serving dishes all at least half filled with bacon. If they ran out at 1:30pm then I apologize to everyone because I must have eaten all of it. I’m not saying they never ran out of bacon (because there is some evidence that they did), I just never experienced it.

When I went to the bacon bar at 5:00pm they had ran out of some of the types of bacon but not all of the bacon. They even delivered two fresh cooked trays while I was standing there. This is the only time I saw them close to running out, but at this point the fest was actually over and there were only ten people at the bacon bar. They let us have all we wanted and I probably ate a quarter pound of bacon drizzled with caramel and chocolate.

The one thing that really bothered me was that throughout the entire day I never heard a single announcement about who won the various homebrew competition categories.

Sunday was a completely different story. Getting through the gate was like visiting a police state. They demanded two forms of ID, and people were showing credit cards as well as a driver’s license. Some of us were told to take off our armbands from the day before (the same bands we were told to keep on all weekend), while others were just given additional armbands. One friend of mine who bought two tickets, brewed a beer for the competition, and drove all the way from Annapolis, was accused of trying to sneak into the fest because he still had his armband from Saturday on his wrist. The upside to this new process is that we got through the line in record time.

The Sunday crowd was much smaller. I don’t even remember standing in line except when Troeg’s put another one of their special beers on tap. Also, the homebrew winner announcements were much better advertised and they offered a recap of all the previously announced winners.  It was like a completely different festival.

With all the things that went wrong, there were a few things that BBM got right. First of all, there were plenty of bathrooms. I only had to stand in line for the bathroom twice throughout the entire weekend and never for longer than a minute.

The music stage was also setup exactly where it should be. You could hear the bands from where the beer was, but it was never too loud. There was also plenty of space to sprawl out on the lawn and listen to the bands right in front of the stage if that is what you wanted to do.

At the end of the weekend there was a lot to complain about, but for the most part everyone in our group had a really great time hanging out and sampling beers together. BBM seemed to learn most of the lessons from Saturday, and they’ll probably pull off a better event next year. I just really hope they don’t do it so close to Maryland Craft Beer Fest, which is well established and well run. I will go back, but only if it’s with the people from the Annapolis Homebrew Club and we do it just like we did this time.